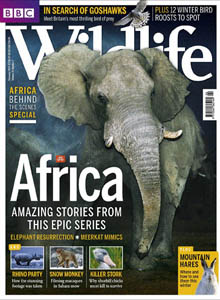 All over Asia, domesticated elephants are disappearing, but they may yet have one last role to play, says Clive Grylls

In 2011, the Elephant Conservation Centre opened in Laos with the aim of supplementing the country’s ‘domesticated’ elephant population through a managed breeding programme.

It was necessary, according to Sebastien Duffillot, of the Laos- based organisation Elefantasia and co-founder of the centre, because, with only 450 left in the country, domesticated elephants are becoming increasingly rare.

Many still work in the logging industry, where demand for their ‘services’ is dying out, but there is another problem. Domesticated Asian elephants were traditionally replenished from the wild, which is now banned.

Breeding from working elephants is costly, however: a cow gestation lasts two years and another two passes before the calf is weaned, and for their riders, called mahouts, this can mean four years lost income. On average, 15 elephants die every year, but only four are born. “The domesticated population could be extinct in 40 years”, Duffilot said.

Elephants have been domesticated in South-east Asia for 4,000 years. In Laos, they were once as common in villages as cows in Europe, but the Vietnam War hugely reduced their numbers and with increasing mechanisation, their place in society is disappearing. The question over whether we should mourn this loss is open to debate.

For the animal welfare group, the People for the Ethical Treatment of Animals (PETA), it is no bad thing, because domestication is cruel. It starts when elephants are four years old and involves beating them and depriving them of food and sleep until their independence is broken.

But the Asian elephant is hardly a conservation success story, with a wild population of some 35,000 animals. This has fallen by 50 per cent over the past 60-75 years, and the species is significantly rarer than its African relative. Some people who support maintaining domesticated elephants argue that they could act as an ark that guarantees the species survival. Unlike other domesticated animals, such as dogs or cows, elephants have never been selectively bred, so they are genetically the same as their wild cousins.

In fact, this is unlikely to happen. There is a shortage of suitable habitat-which is the main reason they are declining- and all over Asia, wild elephants are regarded as pests, and worse, because of crop-raiding. In India, at least 150 people die every year from encounters with elephants.

But this doesn’t negate the importance of domesticated elephants, because they are a huge tourist attraction. Perhaps, then, this is the future? Possibly- but here, too, there are differences of opinion. Sangduen Chailart, who runs a rescue sanctuary called Elephant Haven, argues that at least half of the camps in northern Thailand are ‘ópen prisons’ that deny their elephants proper food, shade and shelter.

Plus different sanctuaries have different policies on whether it OK to ride elephants (see ‘for’ and ‘against’ below), making it harder for a tourist to know what is the right thing to do. Chailart doesn’t permit it because “my elephants have been rescued and I don’t want them to be abused again.”

In the meantime, Elefantasia is working with Richard Lair on drawing up a set of voluntary guidelines for camps and sanctuaries in South-east Asia and intends to grade them all as well. For visitors for whom a holiday would not be complete without seeing traditional domesticated elephants, the message is carry on- but try to make sure you only patronise those institutions that don’t mistreat their inmates 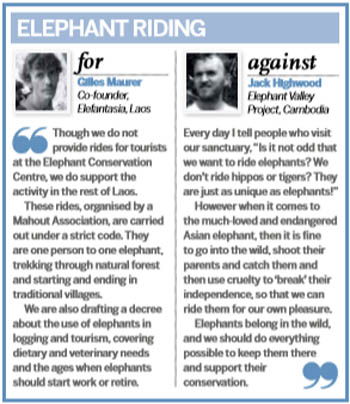