RETURN OF THE WILD 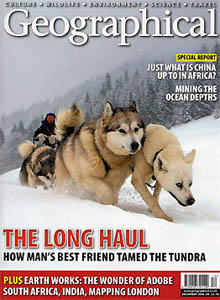 In the largest, most ambitious exercise of its kind ever to be undertaken, 8,000 animals from 27 mammal species have been introduced into Madikwe Game Reserve in South Africa's North-West province. But as well as returning this former farmland to its natural state, 'Operation Phoenix' is also helping to provide a future for the local communities.

Flying over Madikwe Game Reserve, the ground below is a mosaic of russet, green and golden hues, vibrant in the slanted rays of the setting sun. To our right, a troupe of elephants wallows in the mud on the fringe of a waterhole. As we circle the runway a lone male giraffe gives us clearance to land ambling off the Tarmac to nibble contentedly on the foliage of an acacia tree.

Once on the ground, I'm met by William Stephens, the proprietor of Madikwe Investments. On the way to one of his lodges, Madikwe Hills, he fills me in on the history of the 55,000-hectare reserve, which is located in South Africa's North-West province. "Prior to the Reserves establishment this whole region consisted of degraded cattle farms that had been expropriated from white farmers," he tells me. "Under the apartheid system, the farms had, in turn, displaced whole communities of tribal groups from their traditional homelands. Most of the wildlife found in the region had long since been hunted out and the whole area was an economic backwater.'

In 1991, the local government, acting on an independent feasibility study, decided that, rather than return the land back to the tribal groups, their economic future would be better served by turning the whole area into a game reserve. The North West Park Board-a world renowned organisation famed for its pioneering approach to people-based wildlife conservation- was appointed to deliver a development plan in partnership with the private sector and the local communities.

The parks Board's role was to manage and restock the reserve with wildlife. Lucrative leasehold agreements were used to encourage the private sector to developer lodges and infrastructure to facilitate the growth of tourism in the area. The local communities would benefit from the new jobs created and the skills learnt, and income from the leaseholds would be used by the Board to finance further restocking and to set up local community projects.

RISING FROM THE ASHES

Today, as the result of a programme called 'Operation Phoenix', the venture has successfully reintroduced more than 8,000 animals from 27 mammal species-the largest exercise of its kind ever to be undertaken in the world.

The mammals reintroduced include whole families of elephants, disease free buffalo, black and white rhino and most of the hoofed and ungulate species found in Southern Africa, including the valuable sable. Disease free lions were brought in from Etosha National Park in Namibia. Their population has now tripled, and remains one of the only stocks in Africa to be free of tuberculosis and feline AIDS. So successful have they been that several animals from these prides have now been introduced to other conservation areas.

Cheetahs and spotted hyenas were also introduced from other parts of South Africa, while leopards and endangered brown hyenas were already present in the area, although in greatly reduced numbers.

However, it was the successful re-introduction of the African wild dog, one of Africa's most charismatic and endangered predators that has brought the venture the most plaudits.

The restocking took place over a period of seven years, and initially concentrated on introducing large numbers of herbivores, particularly impala, blue wildebeest and zebra. The predators were only introduced once a viable prey base had been established.

After release, individuals from some of the more valuable species such as elephants, lions, rhinos, and sable were radio-collared to allow their movements to be monitored and to see what parts of the reserve they were utilising.

Steven Dell was appointed field ecologist of the reserve in 2000 a year after the completion of the restocking programme.

'You have to remember that the Madikwe project was an economic model designed to generate a better income for the area and this relied on providing good game sightings to attract tourism to the area," he tells me. " Conservation wasn't the project's primary objective, but the project still has to be ecologically driven.'

All of the predators, with the exception of cheetahs, have bred well and increased in numbers. This has posed difficult problems for the reserve's management in terms of controlling the predator-prey ratio.

"This is much more easier to understand in large areas such as the Serengeti or Kruger National Park," Dell says. "But in a small enclosed reserve such as Madikwe, it becomes much trickier."

Dell believes that Operation Phoenix has been a success, but that mistakes have been made. "Because Madikwe is so multi-faceted in terms of habitats, we tried to go for a multi-species ungulate approach, and certain species did well and others didn't," he says. "We introduced some of them in insufficient numbers and they were impacted too heavily by predators because they had such a small founding population. Others, such as eland, hemsbok, springbok and hartebeest are ideally suited to arid Kalahari eco-zones and the areas here that suited them were too small or marginal."

While the Kalahari regions are tick free, Madikwe isn't, and Dell believes that the ticks had weakened many of the ungulates, making them more vulnerable to predation.

Another problem was that the project's initial annual game counts were flawed. For the first six years, the counts were made using what's known as a district-sampling method.

"This involves flying over certain strips of the park," says Dell, "with the assumption that the number of animals counted will be duplicated-through a formula that I will never understand-in other areas of the park.

"The district sampling told us that the zebra, wildebeest and impala populations were increasing even though the predator density was also going up," he continues. "That made us think, 'Do we have enough grass to keep them all alive?' So the park's board became the reserve's seventh predator and sold a large number of wildebeest and impalas to other Parks."

Then, three years ago, the reserve's managers instituted so-called total counts, where spotters flew over the total area in strips, counting every single animal. These counts were then replicated by several people to rule out observer bias. They soon discovered that the impala and wildebeest populations were actually falling.

"Once these species were at a lower level, predation became a factor-they couldn't recover and they were pushed into a 'predator pit'," Dell says. In order to compensate for this, the reserve's management is now in the process of introducing 1800 wildebeest and 1000 impala into the reserve.

And in a new initiative, the park's board is hoping to secure the land separating Madikwe and Pilanesberg National Park to the east, in order to create a much larger, continuous stretch of protected territory.

A crucial element of Madikwe's success has been to put the needs of the local community first, by integrating them into the reserve's economic framework. Although the initial uptake of leases from the private sector was slower than expected, the reserve now boasts more than 30 tourist lodges, ranging from simple, self-catering accommodation to some of the best appointed seven-star operations in Africa.

Two of the three largest black communities around Madikwe now own their own lodges built on land leased from the park's board-the first community- owned lodges in Africa. The project has also created more than 700 jobs for the tribal communities, five times more than would have existed if the area had been returned to agriculture.

The first community lodge to open in the park-in November 2004-was Buffalo Ridge Guest House' which is owned by the 1400-strong 'Balete' community. Moremi Keabetswe, a member of the Balete, was trained as a guide through an ongoing government lodge-internship programme. He has since been promoted through the ranks in several lodges and now works as the assistant manager at Buffalo Ridge.

"The concept of us owning our own lodge was first mooted seven years ago," he tells me. "A consultancy firm was appointed to help us so that we could raise the funds to build it." Those funds-a total of four million rands-duly came from local government and the U.S. based Ford Foundation.

The Nature Workshop, a management company that's based in Johannesburg, was awarded a fifteen-year contract to run the lodge for the Balete. In return it pays their concession fees and hands over a percentage of the profits.

The Nature Workshop's Penny Korb takes up the story: 'Our brief was to recruit 26 staff from the community and train them up from scratch. As people are trained, they can move on to other senior jobs in other lodges and their positions can be filled by recruiting other community members.'

"The money that we receive pays off our loans and what is left over, we spend on resurrecting community businesses that will service the lodges and make more money for our community, such as brick making," says Keabetswe. "The level of commitment shown by the staff here is higher than other lodges. They have to work hard for its success so their kids can have a better future."

That success will depend on further investment in Madikwe. In 2000, my host William Stephens, together with his business partner, Carl Trieloff, formed Madikwe Investments to act as a catalyst for such a process "We took the risks and tendered for some of the reserves' concessions and broke these up to sell on to other investors," Stephens explains.

"We kept back some of the better sites which we either run ourselves or with other joint partners," Trieloff continues. "You need to have a lot of passion about the reserve because on a rand-to-rand investment, there are better industries to put your money into."

One problem that Stephens and Trieloff faced was that the concept of leaseholds was unknown in South Africa, which made investors wary. "Another problem was that there was very little in the way of infrastructure in the reserve, so we took the risks to build some of the roads and put in the water and electricity supplies so that the concessions that we acquired could operate," Stephens says.

"At the start we flew in potential investors on a daily basis and explained the benefits of the project," says Trieloff. "The satisfaction gained now from those early pioneering days is that people are falling over themselves to invest in the reserve."

During my stay, I saw wild dog pups playing outside of their den while the pack's adult members regurgitated meat for them. I watched a lion and lioness wait on either side of a thicket to ambush a male warthog and had countless other magical encounters with Madikwe's abundant wildlife.

However, as I boarded the plane for the one hour trip back to Johannesburg, what thrilled me the most about my visit to the reserve was the vision of young and old, experienced and inexperienced, black and white people successfully united to forge their own economic future.